HomeWho We AreHistory of YWCA Boulder County
A- A A+

YWCA Boulder County acknowledges that the land where we live today is the unceded territory of Hinóno’éí (Arapaho), Tsistsistas (Cheyenne), and Nuciu (Ute) nations. As we reflect on the history of YWCA Boulder County, let us remember that the Boulder Valley is home to the Hinóno’éí, Tsistsistas, and Nuciu people and to many other tribes that also camped, hunted, and traded here for centuries. And that Native people of many Indigenous nations live here today. 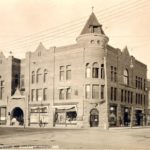 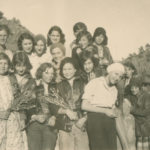 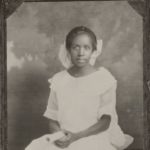 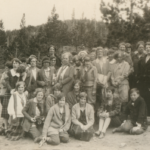 In 1921, a representative from the YWCA national office visited Boulder to explore interest in establishing a chapter in the community. While YWCA organizations already existed at the University of Colorado and Boulder High School, neither focused on the needs of the wider community of women and girls in the area, particularly business and professional women. A group of volunteers conducted a survey of the community that showed more than 300 employed young women lived in Boulder, one-third of them living away from their families. Based on these findings, these volunteers decided to establish a community-based YWCA, independent from the school-based chapters, that would provide meeting space, recreational events, and social opportunities. As one organizer told the local newspaper, “Our aim is to make the YWCA a real community center for all the women and girls of Boulder.”

After a successful community fundraising campaign, Boulder YWCA rented a former dance hall in the Masonic Temple as its headquarters. The new facility opened on May 15, 1922. YWCA rooms provided a safe, socially acceptable place for single women to relax, take their lunch breaks, or rest while traveling through Boulder. Volunteers offered services such as a women’s employment registry and a room registry, which listed lodging for rent in Boulder that had been vetted by a YWCA committee. Housing for women was particularly tight in Boulder at the time, because the University had closed its women’s dormitories and would not build a new one until 1934.

YWCA held social events like holiday parties, recreational classes like folk dancing and ukulele, and summer retreats and hikes in the nearby mountains. The organization opened its facilities to affiliated groups and other community organizations for meetings, serving an average of more than 1,000 people per month throughout the 1920s.

By 1926, YWCA had formed several groups including the Blue Triangle Club for young businesswomen and Girl Reserves for girls 18 and under. YWCA was a racially segregated organization at this time, both locally and nationally. Despite these restrictions, Black women and girls took an active role in building the YWCA movement through Phyllis Wheatley branches, named for an enslaved 19th century poet. In Boulder, the Phyllis Wheatley Girl Reserves hosted meetings for Black high school and college-aged young women in the YWCA rooms and carried out charitable projects at local hospitals.

Despite the success of the 1920s, YWCA’s next decade would be inextricably linked with the impact of the Great Depression. In 1930, a YWCA representative told a local newspaper that the demand for their employment registry was no higher than previous years, but there were few jobs available outside of domestic service. By 1933, membership payments were drying up, and the board was forced to close the YWCA rooms and sell off their furnishings. Groups like the Blue Triangle Club continued to meet, supported by the organization’s dwindling reserve funds, but YWCA as it had been in the 1920s was over. 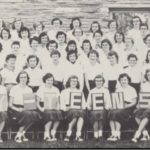 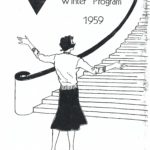 Despite the closure of Boulder’s community YWCA, a small group of women continued to support the YWCA movement in the 1940s. The Colorado District YWCA (later known as the Town and Country YWCA) organized Y-Teens clubs for young women throughout the state, including at Boulder High School. Boulder women served on the board of the District YWCA and contributed financially.

By the mid-1950s, this core group of women decided to explore reforming a Boulder community-based YWCA. In May 1958, they held the first meeting of the re-established Boulder Community YWCA (later known as YWCA Boulder County). Reflecting changes at the national level of YWCA, membership in the Boulder organization was open to those of all faiths and was racially integrated. Founding board members included Margaret Owen, a retired executive of Pittsburgh YWCA; Mildred Nilon, CU’s first Black librarian; and women who had been Blue Triangle members in the 1920s. Activities included a Y-Wives group for young married women, a Luncheon Club for employed women, and classes in parenting, crafts and dance. 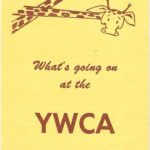 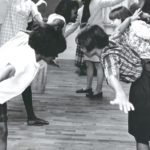 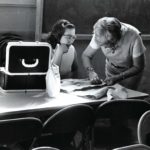 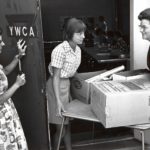 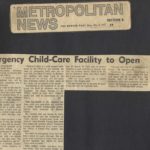 By the early 1960s, the Boulder YWCA had moved its headquarters out of volunteers’ homes into rented office space, and the board hired part-time staff. Organization offices were located in the old Physician’s Building (PIC) at 1345 Spruce St., now the Boulder Shambhala Center. According to a report conducted by YWCA volunteers, these facilities were overcrowded and “appallingly ugly.” YWCA was forced to hold its programs in a dozen locations throughout Boulder, from churches to schools.

After decades of renting space, YWCA Boulder County finally found a permanent home. In September 1968, YWCA acquired the former St. John’s Parish Hall at 2222 14th St. and an adjacent house at 1410 Mapleton. The organization’s first-ever successful capital campaign raised $110,000 for purchase and remodel of the building. After the move into the new building, YWCA class enrollment doubled. Programs emphasized providing women with a social outlet and recreational opportunities. Classes and events embodied the contradictions of women’s lives in the 1960s, from monthly public affairs lectures on topics such as women in politics and affordable housing, to “charm classes” and fashion shows.

As the social and political climate changed in the 1970s, enrollment in weekday classes dropped, with more women re-entering the workforce after raising children. Energized by second-wave feminism, a new generation of women joined YWCA and pushed for change within the organization. In the words of one volunteer from the time, members were asking themselves whether YWCA would “be an activist group or a comfy place to do crafts.” YWCA Boulder County recognized new community needs and began programs offering career resources and teaching English as a second language.

YWCA’s biggest undertaking in the 1970s laid the foundations for a crucial program that has supported generations of families in Boulder County. Throughout the 1960s and 1970s, YWCA provided drop-in child care for mothers attending daytime classes. By the late 1970s, the board began exploring the idea of emergency drop-in child care available to the entire community, as a means of supporting women and in response to local concerns about child abuse and neglect. Children’s Alley opened as a pilot program in December 1977, with space for six children, with two additional spaces for older children before or after school. The program made an immediate impact: in the words of one parent, “I really would have been lost without your help.” 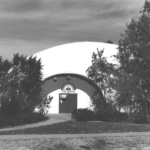 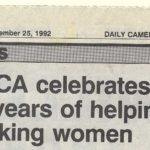 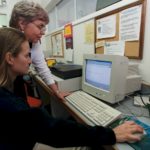 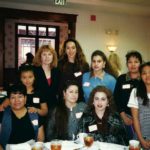 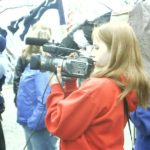 In the early 1980s, Boulder’s YWCA continued its shift in focus from a women’s community center to a human services provider. To fill the gap left by the closure of another women’s nonprofit, YWCA created a Women’s Opportunity Center offering employment counseling and legal assistance. YWCA also operated a teen center for several years in a former Boys Club building at Folsom and Mapleton.

YWCA Boulder County faced a watershed moment in the mid-1980s. The organization had come to rely heavily on financial support from local government and United Way. When a crisis in financial mismanagement became public in 1987, YWCA lost most of its institutional funding and much of its reputation in the community. Only an energetic new director, Janet Beardsley, and determined community volunteers saved the organization from closing its doors as it had done in the 1930s.

A reinvigorated YWCA widened its reach in the 1990s, focusing on “You, Women, Children, All of us”. YWCA took a more active role in advocating for public policies in support of women, girls and families. The organization continued to offer career resource programs, adding additional job and life skills training to support women impacted by federal welfare reform. In addition to Children’s Alley, services for families included teen parenting and single parent support programs. YWCA launched its EDGE Empowerment Program in 1995, continuing its tradition of supporting of girls and young women dating back to the Girls Reserves of the 1920s and Y-Teens of the 1950s. The program used innovative community collaborations and projects to build confidence, including a newspaper and a documentary series produced by girls, for girls, with mentoring from local media professionals. 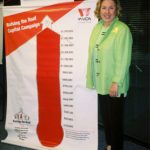 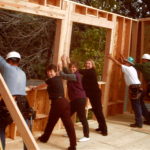 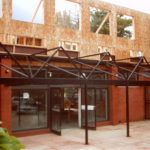 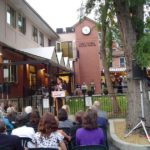 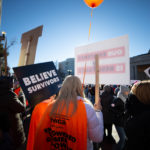 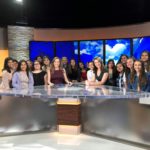 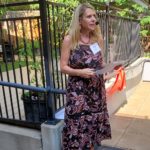 YWCA entered the new millennium with renewed energy and a drive to expand, both its physical space and its programs. In 2001, the staff and board launched a $2.5 million capital campaign to add a second story to the organization’s building, doubling the capacity of Children’s Alley and providing much-needed space for expansion of other programs. After four years of perseverance through fundraising challenges and major construction, the remodeled YWCA building officially reopened on September 23, 2005.

The new space allowed YWCA to provide facilities for other community groups and fostered new collaborations. Reading to End Racism, founded as a grassroots organization in 1998, merged with YWCA Boulder County in 2013. Latina Achievement Support grew out of a collaboration between YWCA and El Centro Amistad in 2007. First known as Puente (“bridge” in Spanish), the program originally supported Latina students when making the transition from middle to high school; it was redesigned as an academic year program for high school students in 2013. In 2019, YWCA Boulder was selected as one of two YWCA branches in the country to receive a three-year grant from Google.org to increase Black and Latina students’ access to computer science education, resulting in the STEM E3 program. YWCA expanded racial justice education to adults in 2020.

For the past 100 years, YWCA Boulder County has been at the forefront of the most critical social movements and has helped women, children and families in Boulder County to thrive. Our organization has shown up for our community time and time again. You can count on us to continue to serve our community for the next 100 years…and beyond.